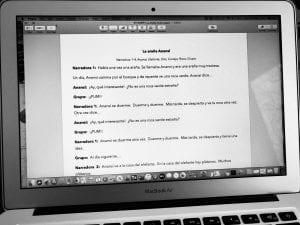 Since the beginning of the year, I have been providing my students with rich input via stories. After SL my fourth and fifth graders see the text as I conduct a read aloud in class. Fifth graders also engage in Guided Self Selected Reading once a week for 7-12 minutes. My schedule allows me to see fifth grade 3 times a week: one 30 min. class and two 45 min. classes.

Some students in fifth grade have been expressing their desire to read during the read aloud session. I am typically hesitant, unless I know the student is an excellent reader, as the text is usually as complex as the story and I don’t want the student to have a negative experience or feel unsuccessful.

This week after I told the story of Anansi, the mischievous spider, I decided to change the reading from paragraph format to a script, like a play. I also simplified it. I first read the text aloud as usual. Then I asked if anyone felt comfortable and capable of reading a part on their own. So many hands went up that I had to select students randomly with “de Tin Marín de do pingüe” (eenie meenie miny moe). After we selected readers and their parts, the students began to read the story and I noticed a beautiful thing . . . they didn’t need me. Almost everyone followed along, keeping their spot. Those who volunteered for a speaking part read well. Some students were guiding others on pronunciation, but in a kind way. After one round we had to switch readers because so many were interested in participating. In one case, a student who had recently moved from Singapore and had been with me for 1 month volunteered for a part. I walked over to him and recommended that a group part might be better since he was relatively new in class. His face showed me that he was disappointed, so I asked,

“Did you take a look at the part?”

“Do you feel comfortable and capable reading it on your own?” I asked unconvinced.

I acquiesced, resolving to stand close to him and assist with the reading when he needed it. But he didn’t need it. I was amazed at how comfortably and effortlessly he read. Full disclosure, this student seems to be above average academically, but he had no prior exposure to Spanish before coming to my class.

At the end of class, I walked over to him and said,

“You did a wonderful job reading today, particularly for only having been in class for one month. Just think about how much you’ve learned. You should feel proud.”

He looked at me, gave me the sweetest smile ever, and said,

This encounter is another experience in a group of many that has shown me once again the true power of SL and reading. For this student to come so far in just one month, with class three times a week, was phenomenal to me. Even more important than his advances was that his language acquisition had been so effortless he himself hadn’t realized how much progress he had made.

Another thing I noticed during this activity were some mistakes students made; beautiful, lovely mistakes. Let me tell you why I see them this way. Some students while reading the part, “ve la roca” (sees the rock), added a personal “a”, “ve a la roca.” Now, normally I wouldn’t be thrilled about mistakes, but this one was interesting to me. Why were they adding a personal “a” in front of rock? It is an inanimate object and therefore doesn’t require an “a.” After I thought about it, I realized that they had heard me tell so many stories where a person or a personified animal was looking at someone else, they had internalized this abstract (and hard to teach explicitly) grammatical function in the Spanish language.

I love how beautifully and naturally SL and GSSR prepares and enables students to read independently. With a whopping dose of stories and a healthy dose of read alouds, I’ve seen proficient readers emerge in my classroom. At the same time, struggling readers are not forced or shamed and the continuation of stories will further develop their skills. I must confess, I’m a believer.